I promise to get back to blogging our trip during a bus ride tomorrow.  Today I was excited to receive word that I am the adult winner of the “Little House, Big Story” essay contest, sponsored by Old World Wisconsin in recognition of Laura Ingalls Wilder’s 150th birthday.  Here is my submission. 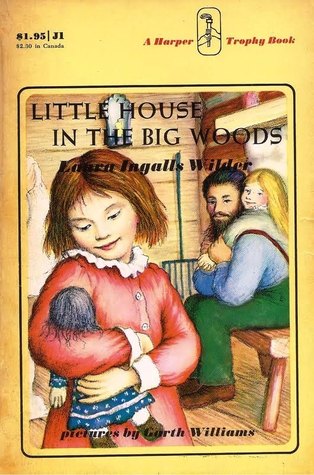 Once upon a time, a little more than forty years ago, a little girl lived on the wide open prairies of southern Wisconsin, in a ramshackle farmhouse with a cellar made of fieldstones and big old hewn logs.  Upstairs looked more or less like a regular 1970’s house.  The kitchen had an avocado green-themed suite of appliances, there was a TV with three channels, and she brushed her teeth at night with water from a running tap.  However, she never forgot that, underneath the floors covered with wall-to-wall carpet, there was a cellar with 150-year old logs holding things up, so weathered with time that her dad could sink his thumbnail into them.  The little girl’s name was Angie.

Angie’s dad wanted to be a farmer, but there wasn’t enough family farm left for him to inherit.  His parents, Angie’s grandma and grandpa, said “Farming is no life for your family;  we just can’t cosign that loan.”  So instead he became a firefighter and a coach, and he played at being a farmer with Angie, and eventually her two younger sisters and two younger brothers, in the old white barn next to the ramshackle farmhouse.  He filled the barn with chickens and lambs and, occasionally, a pig.  Every winter Angie’s mom would stock a freezer with a hundred chickens, enough to last them through the winter, because firefighters didn’t make much money and five kids were a lot to feed.  Maybe that was it.  Maybe the thought of an attic stuffed with pumpkins and braided ropes of onions matched up with her own basement full of frozen chickens and gallons of milk.  Maybe that’s why her heart and brain were just waiting to be filled up with stories of another little girl, named Laura.

When Angie was five or six, her Auntie Carol gave her a very special book for her birthday.  The book had a buttery yellow cover and a picture on the front of a little girl hugging her baby doll.  The girl had brown hair, just like Angie, and in the background was a dad and a beautiful sister with golden hair, just like all four of Angie’s brothers and sisters.  Angie already knew that being the only one without golden hair could be hard, especially when the old ladies at church would come up and stroke her sisters’ gleaming locks.  Maybe that was it.  Maybe that was why she read that book so many times that both covers fell off.

When Angie started school, she found that the work came easily.  Pleasing her teachers gave her a warm feeling in her heart.  It made her feel special in a good way.  However, she quickly learned that some of the other children at school felt otherwise.   She would flush pink with shame when classmates pointed out how quickly she completed her tasks and mockingly called her “teacher’s pet.”  For a while, she hid her talents to avoid any attention at all, good or bad.  One time Angie erased and re-wrote all of the answers during a test, in order to avoid being the first to walk her work up to the front of the class.  Her teacher, Mrs. Buggs, commented in green felt tip:  “Why so much erasing?”  Angie wondered what to do, whether to please her teachers and herself or her schoolmates.  But Angie’s book friend, Laura, won her spelling bees and made her Ma and Pa proud by being tops in her one-room schoolhouse and she turned out alright.  That felt good to know, and the shame started to melt away a little bit.  Maybe that was why.  Maybe that’s why she collected all the rest of the buttery yellow books about a girl named Laura and read the covers off of them, too.

When she grew older, Angie and her friends would laugh about how she was secretly an old lady, because she liked to do things like put up preserves and sew her own curtains. She preferred to watch movies checked out from the library or on PBS instead of the latest blockbuster.  She took the long way to Sioux Falls along Highway 14, the Laura Ingalls Memorial Highway, even though it made her late.  But her friends always came to her when they needed a recipe, a button sewn on, or when they needed to round out their Trivia teams.  Angie was their own personal anachronism, and they cherished her for it. What those gently teasing friends didn’t know, though, was that Angie was pretty sure that she had already been an old lady for many many years, that her story really fit best in those buttery yellow books, that she’d already lived a life in the past and that modern times were just a jarring inconvenience. Maybe that was it.  Maybe that was why she re-read those coverless books every few years even into her 20’s and 30’s and 40’s.

Angie grew older and realized that her preference for Laura and her literary sisters, Anne and Caddie, wasn’t something to be ashamed of but to be celebrated.  Angie spent hours talking to her elderly relatives and tracing her own family’s history through the long-since-felled Big Woods of Wisconsin.  She found their pictures and preserved them, she wrote their stories and shared them, she collected their belongings in danger of being discarded and cherished them.   To Angie, the past had never been a static thing, but a living breathing reality.  Laura and the buttery yellow books started that.  Maybe that was reason enough.

5 thoughts on “The Reason Why: A Brief Detour”