Over the past couple of days the group has experienced some sights that have messed with my notions of time and space.  In terms of space, the drive from Munich’s airport to our hotel let me to wonder why on earth we’d traveled all this way to come back to southern Wisconsin.  The landscape is eerily similar and, save for the street signs, one could easily think that we’d barely moved at all, let alone journeyed over thousands and thousands of miles.  I’m not sure who the first German Bohemian was to settle in southern Wisconsin.  However, I now believe that they did so by simply getting off a westward-bound train when things looked familiar.

The compression of time is a far more nuanced and complex discussion.  I was struck by how some structures made to look old were actually quite new, and vice versa.  Equally striking was the interwoven nature of my family’s “dates” and histories with those events of the past.

This church was built as a pilgrimage site, and located smack in the middle of the countryside.  It is dripping in the pastel gilt that is textbook Bavarian Rococo.  It commemorates the miracle of a wooden statue of Jesus that was reported to be seen weeping on several occasions.  This miracle, one that I would have thought to be thoroughly shrouded in the mists of time reportedly occurred in 1738, less than 100 years before…

I knew nothing about the Bavarian monarchy prior to this trip.  While the Wittelsbach family consolidated power as Dukes for many years, Bavaria was only a Kingdom from 1806-1918.  Thus, while this castle was made to look old, it is really quite new.  It was built as a summer hunting residence for King Maximiliian the II and is where his son, King Ludwig II, grew up.

This castle, commemorated on calendars and puzzles worldwide, is built just a stone’s throw from Hohenschwangau.  Ludwig II built a fantasy castle decorated on the inside with fairy tale scenes from Richard Wagner’s operas.  The interior is amazing but photographs are not allowed;  a peek at interior shots is worthwhile.  Ludwig II gazed out from a window in Hohenschwangau as his dream, the exterior conceived by a set designer rather than an architect, went up across the gorge over years.  He only slept there for 172 nights before his strange tale ended mysteriously.  The castle is only a pastiche of the medieval:  inside was running water and a telephone (that only connected to the post office and Ludwig’s mother).  All of this opulence existed while my ancestors, and countless others, toiled in poverty and obscurity in Wisconsin.

We  spent several sobering hours at Dachau.  The horrors committed and endured here rendered the experience solemn and horrifying.  The experience is etched forever in our collective memories.

Overall, an interesting couple of days taking in sights, surviving the rain, and thinking about the compression of time.

Here’s a few parting shots that don’t fit in with the theme but need to be seen: 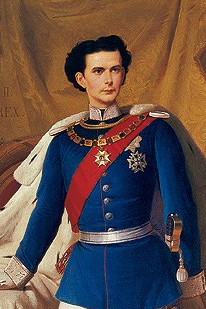 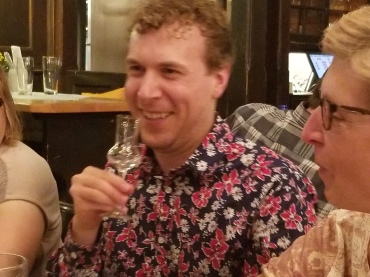 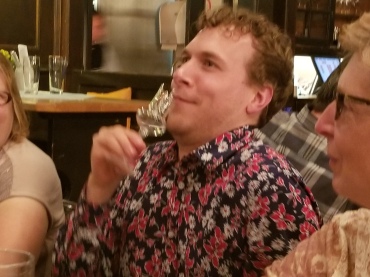 Patrick dressed in a natty fashion for our castle tour, feeling that royalty is truly in his blood.  His management of this schnapps glass suggests otherwise. 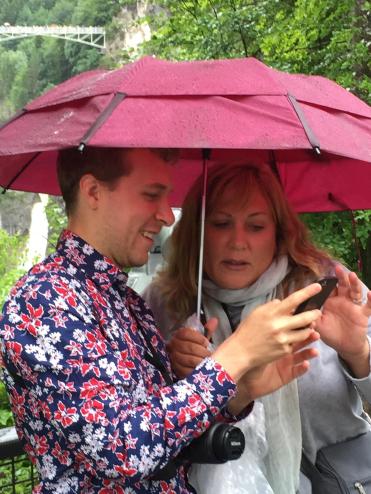 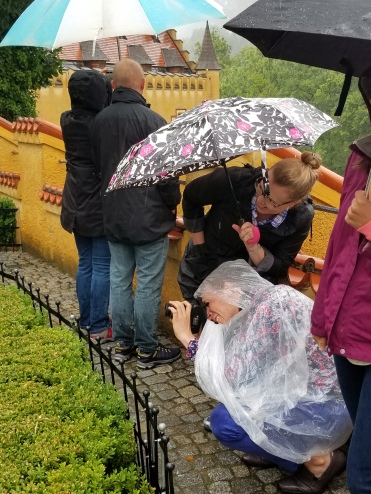 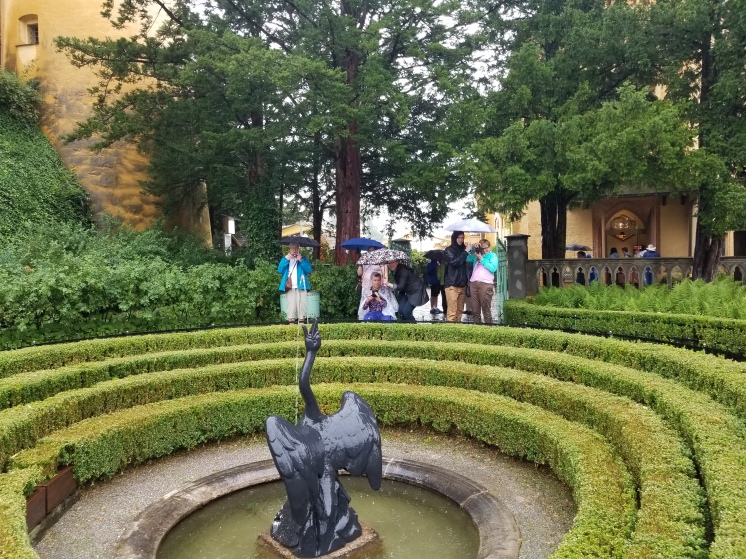 We had rainy days for our tours of the Bavarian castles, but managed thanks for the preparedness of the numerous former Girl Scouts in our group.

One thought on “Bier Trip to the Homeland Part III: Old is a relative term”