Last week I chaperoned sixth grade camp.  This is a thing wherein all of the 350-odd sixth graders in our school district’s five elementary schools are combined prior to heading off to middle school, where they will officially become one class.  The kids are carefully assigned to cabins and groups so that maximum mixing of unknown variables occurs over the time period.  They do a lot of camp-ish activities, but I’m pretty sure that the main goal is to meet new people and break down the elementary school tribal barriers.  In addition to geocaching and a preferred method to tie-dye, here’s a few things I learned:

Sixth graders still make friends by kid rules, i.e., easily and quickly.  The first day, the kids stuck fiercely by the people that they knew from their own schools, come hell or high water.  Unlike adults, however, they had pretty much gotten over themselves by the dawn of the second day. At the end, when the camp leader asked for everyone who had made a new friend or met a new person to raise their hand, every hand was raised.  Phone numbers were exchanged and, much to my locked-down-phone daughter’s chagrin, Snapchat handles were shared.

They make friends quickly, but the taxonomy has already been established.  I don’t mean to suggest that camp consisted of one big, happy, homogenous, kumbaya group.  The other thing I was amazed by was the sorting that happened. See, the whole bunch of kids were shaken out of their standard school social groups, dumped in a big bucket, shaken around, and then dumped back out.  The less jaded among us might hope that friendships would then coalesce randomly. Far from it.  All of the usual groups that were there when I was in school?  They were reformed and replicated almost as soon as the proverbial bucket turned over.  I especially noticed this among the girls, although to be fair it could be that I’m simply better able to identify the calling cards of girl social groups.  The socially elite, all wearing the same hairstyle and striding confidently in a clutch through camp. The sporty girls, all slightly differently yet similarly attired;  they seemed to be the girl group that had mastered interacting with the boys in a social setting most effectively.  The solid middle class, which would have been my people, mostly sticking to themselves but having fun.  The confident outsiders, banning together and wearing their weirdness proudly. The oblivious. The lost. It was hard for me to see my own daughter and her longtime friends from way back re-sorting in this way.  I settled on my message for the inevitable re-sort: I don’t care if you are best friends with everyone, but you better darn well be kind to everyone.

I’m not sure why I work so hard on meals.  I don’t make something gourmet every night, but I try cook seasonally and thoughtfully.  I consider myself a moderately accomplished home cook.  My daughter requested that I start cooking more like camp, which I guess means heating up individual pizzas and making institutional mac and cheese.

Sixth grade girls are very into personal hygiene, and yet they kind of aren’t.  I had girls scanning their schedules as soon as we arrived, planning when they were going to shower.  They discussed which showers they were going to use, and planned showering dates with friends with the urgency of a debutante ball.  They compared notes on what they’d wear to and from the shower, and compared the scent of overwhelmingly fruity scented products in the impossibly steamy bathrooms.  So, yeah, they were into it. (Aside: I was reminded why I don’t love dorm style showering. I attended a residential college, so dorm showers were my lot for four straight years.  And I’ll still have an occasional nightmare about showering, ranging from arriving at the shower area without any products, to the general condition of the showers come Sunday evening after a day and half without janitorial attention).  But they don’t really have the details down. For example:  removing one’s wet shoes and socks before they are allowed to ferment on one’s feet over an entire day. They didn’t quite master that detail.  The smell that greeted me upon returning to the cabin that second night was just rank.  We immediately banned any and all footwear to the outdoors, and the girls attempted to mitigated with fruity scented products. It helped…a little. I can only imagine the situation in the boys’ cabins.

Sixth grade is a time of great leaps of maturation, both physically and otherwise. 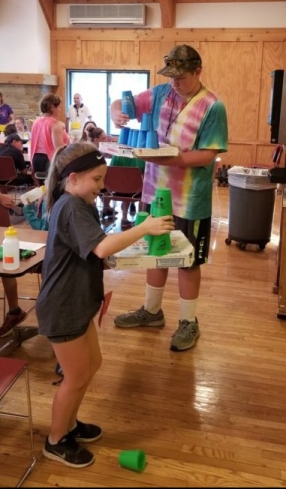 I managed to capture this shot one night during game time–these are both sixth graders!  The range of physicality in the room was astonishing, from kids who look like they still need a booster seat to ride in the car safely to those that I wouldn’t bat an eye at if they showed up as my Uber driver.  Along with the size, boy does a lot of change happen during this year. I don’t even know how to describe or capture it exactly, but some invisible divide is crossed, imperceptibly for most of them. For example, back in October when parents were asked to volunteer to chaperone, I swear that my daughter gave me an enthusiastic “yesyesyes.”  However several weeks ago, I was met with mild eye rolling and “Okaaaaay.” Same kid. Same trip. Same mom. Six months. I can barely keep up with where she’s at mentally and emotionally. Parenting through tricky moments feels like a craps shoot–I never know who I’m going to get! Which reminds me to point out:  sixth grade teachers an amazing breed.  Those that have stayed with it are so nimble with these kids, they seem to be able to meet them wherever they’re at, sometimes this means addressing different audiences in the same actual audience simultaneously. It looks exhausting. 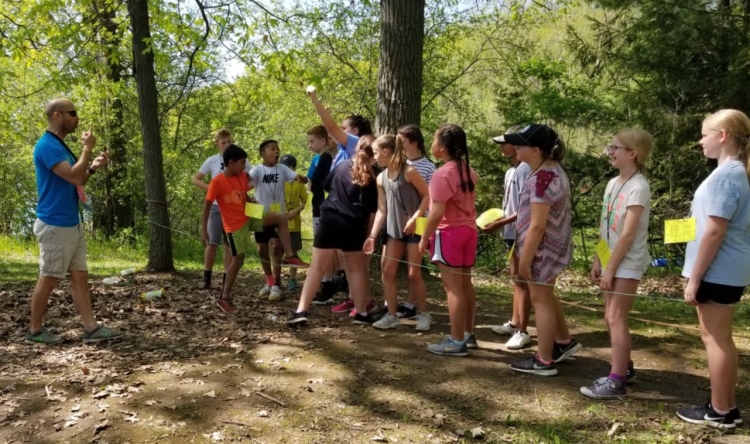 I have found my spirit animal and she wears a green khaki shirt.  One evening we had campfire time, which was led by a no-nonsense, extraordinarily loud woman with a practical gray haircut.  I’d put her in her early 60s. She’s been doing this for over 30 years, and she had it down. Sure the kids rolled their eyes at the overly dramatic enunciation of the campfire songs, but by golly they all learned the words!  And all but the most jaded were forced to laugh and participate in the end. She even taught me a few I didn’t know, which is amazing. Then she ran the most militarized s’mores situation I’ve ever witnessed. It took 10 minutes to debrief the kids on the exact steps necessary to accomplish getting s’mores into 85 kids without anyone being burned or impaled.  But again, by golly she did it. Afterward Natalie informed me that she knew that’s what I’m going to be like someday. Well, CLEARLY.

The adults really can’t hang.  We need ice. We need more sleep.  We need ready access to toilet facilities.  We need to not be awoken late at night because our cabin is having a farting competition and then, shockingly, needs to be chaperoned to the bathrooms to poop.  We need sleep! It felt like how I used to feel after 36 hours of call during intern year, complete with interludes on a desperately uncomfortable mattress with half-sleep punctuated by periods of being jerked awake.  By the last morning we looked rough. The adults started to perk up, however, when the countdown to camp ending reached the minutes phase. I got home and slept for three hours. My daughter watched a little TV and launched into a Memorial Day Weekend of a full social calendar.

So, I was exhausted.  But I’m so glad that I got to go.  For one, I had a Big Emotional Moment with my daughter.  This girl is as even keel as they come. She doesn’t enter into a whole lot of negative drama, which is great.  But she doesn’t give me a whole lot of positive emotion either, aside from the automated “love you’s” that echo my own.  On the last day, she spontaneously gave me a little half hug and told me that “you’re not the worst mom here.” Seriously, cross-stitch that on a throw pillow, because it made it all worthwhile.  On a less personal note, I got a real sense of where my daughter’s at and the social milieu that awaits her when she enters middle school. I felt like I got to see the last glimpse of these kids, many of whom I’ve known since they were three, for the last time, at least as a group.  As they milled about in a scrum waiting for their buses to take them back for what will surely be the eight most useless days of school of their lives, I teared up. It’s the end of an era.

5 thoughts on “I Went To The Woods To Live Peripherally: Random thoughts on sixth grade camp”