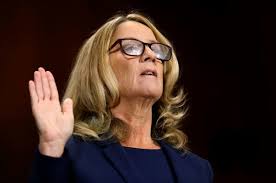 I just finished watching Dr. Christine Blasey Ford testify.  I was intermittently proud, sympathetic, enraged, and devastated.  I don’t know if I’ll watch Kavanaugh.  Probably.  But here’s some thoughts, in no particular order, that I need to get out there.

Groups of laughing teenage boys are the scariest thing on earth.

Dr. Blasey-Ford said that the most memorable part of her assault was the laughter.  Even if you haven’t suffered sexual assault, I’d be surprised if most women can’t describes events of humiliation at the hands of laughing groups of teenage boys.  Building up their social capital at the expense of women.  It’s gross.   And then those guys get to grow up and cash in on that social capital and forget all about it while we get to develop eating disorders and seek healing through therapy.  Did you catch it?  In an interview afterward, Senator Graham suggested that she should have been doing just that, telling her story to a therapist rather than them.

Just because you want something–a job, a TV show, a lifetime appointment to the Supreme Court–doesn’t mean that the only thing standing in your way is a guilty verdict in a criminal trial.  Stop saying things like innocent until proven guilty.  This is a job interview.  If I was interviewing someone for any other job–nanny, CEO, Jiffy Lube employe– the whiff of stink that Kavanaugh leaves in his wake would immediately disqualify that person.  Would you hire this guy to be your nanny?  Would you leave your daughter alone with Trump?  Come on.

They’re going to infantilize the hell out of her

“We should be nice to her.”  That was Grassley’s closing comment before excusing the witness. They’ll say that it doesn’t matter if we believe her or not, poor confused little dear.  We are to pity her, being manipulated by those mean old attorneys and Democrats.  Baloney.