Although I declared my intent to turn my family history attention to my Grandmother’s story, I have to  share a few updates regarding our family homeland in Ketzelsdorf / Koclířov before I do so.

Since receiving a letter from Pepi, our friend in Koclířov, in the fall, a few interesting things have transpired.  And all of them are creating a fascinating, real-time experience in seeing how history is created.  Recall that a year ago, I was still grappling with the fact that Ketzelsdorf (German) had become Koclířov (Czech).  Since then, I’ve seen the evidence of the Slavic version of this story during our time in Prague.  More so, recent correspondence has introduced me to the displaced Germans’ version of the story, and it is a passionate one.

Before Christmas I received a letter from Dr. Franz Kossler, who you may recall is Pepi’s
“professor friend” in Berlin, a fellow Ketzelsdorfer and an historian of the area.  He kindly wrote me in English, and here is his email:

because I was mentioned by Pepi (Koclirov), by Stephan (Berlin) and actually in your article „Voices from the backseat“ (…who is this Dr. Franz Kössler?), it‘s time to introduce myself.

Really, I was born in 1931 in Ketzelsdorf (Koclirov), home no. 60. My father was a carpenter and worked in Zwittau (Svitavy), our mother took care of the children (altogether six, born between 1923 and 1942). She also took care to our small farm with several animals as well as to the agriculture (some hectares).

Until the end of 1944 I visited the school in Ketzelsdorf, but after the wild repulsion (Juni 1945) I was living five years as a farm worker in a small Prussian village. From 1950 to 1953 I visited schools in Potsdam; after that I studied Biology in Berlin five years long.

In 1958 I entered the Institute of Occupational Medicine and was engaged in different fields. During this scientific work I met a lot of famous scientists, among them some from the USA, e.g. Prof. Gergely (Boston), Prof. Hazlewood (Houston).

During my investigations on bioluminescent bacteria I had contact by letters and reprints exchange with the pope of bioluminescence Prof. J. W. Hastings (Boston) and I met him in Chabarowsk (East Siberia) and Boston, in 1979 and in 1996, respectively. In my second dissertation (Habilitation, 1969) many persons of bioluminescent research are cited, among them was Beatrice M. Sweeney (perhaps related to McSweeny?).

I retired 1997, then I started some activities in historical fields, beginning with the history of Botany in Berlin and Potsdam, followed by writing books about my home village Ketzelsdorf, my home area Schönhengstgau and about countries in Eastern Europe where German was spoken earlier..

The term Schönhengst originated presumably from a male horse (in German: hengst) in connection with an ancient burglord with a pretty (in German: schön) horse. Another legend tells that the old traffic road between Ketzelsdorf and Mährisch-Trübau (Mor. Trebova) which has to cross a mountain passage and this crossing was a great strain for horses (in German: schinden, schind den Hengst – Schinhengst-Schönhengst).

Finally, I want to congratulate you to your engagement in family history and the enthusiasm for Ketzelsdorf and the landscape Schönhengst.

Thanks for the informative paper, delivered to Pepi who sent it to Berlin; I prepared a short communication for the Journal Schönhengster Heimat.

In addition to being interesting in its own right (bioluminescent bacteria?  Wow!  Here’s a link to a Wikipedia article.  ), I found the description of how the beautiful region along the Bohemian and Moravian borders got its name.  Finally, if the summary of the story of the Biers’ coming to America ends up being published, I’ll be simply delighted.

The Journal Schönhengster Heimat that he mentions is produced by a society of the Sudeten Germans now residing in Germany.  They also maintain a small museum in  Göppingen, Germany, which is in the Stuttgart region.  Any of you who speak German will probably get more out of this website than I have, even with the assistance of Google translate.

In exploring some of the information contained on this website, I’ve discovered that there’s actually a song to the Schönhengstgau region.  Here’s a google translation of the lyrics, which are quite poetic and evocative:

Between March and Adler spreads
a richly blessed land,
which traverses the wanderer’s path,
captivating as a sweet spell.
Blessing rests in every valley,
Peacefully greenens on mountain and on the meadow.
Greetings many thousands of times,
Trauter German Schönhengstgau!

Our native mother tongue, of
our ancestors of the same kind, is kept
under every roof
like a delicious good.
Manly courage and women’s dignity
Carries the people there proudly.
Stay of the earth garden Zierde,
Trauter German Schönhengstgau!

And the girls, like the boys of
our future, comfort and reverence,
are to dig deep into the heart of
their fathers. Word of Solace :
Shine happiness in golden shades,
Come days dull and gray,
Faithfully bound, yours forever,
Trauten deutscher Schoenhengstgau!

I’ve received further correspondence from Stephan Bier, our presumed relative in Berlin, and I include a few “Google translations” from his letter;

Our small commemorative book “Memories of Ketzelsdorf in Schönhengstgau” will be sent to you by our representative in the local newspaper Wilhelm Bier. He lives in Roitsch in the larger town of Bitterfeld. In Roitsch a larger group of 1,945 stranded Ketzelsdorfern and many of them are still living there or in the neighborhood.

Guess what I came in the mail literally as I was writing this?  The aforementioned copy of the book from another presumed relative, Wilhelm Bier.  It’s wholly in German and I think I’ll have to seek some help from the University on this one!  The small commemorative book, which I was presuming would be a pamphlet, is 278 pages long!!

I will have to add this to my reading list (after translation) after I finish Orderly and Humane, which tells the story of the expulsion of ethnic Germans after WWII.  For some interesting insight into how contentious the issue of the ownership and telling of this story is, read some of its reviews on Amazon.  The author, R.M. Douglas, is careful in his introductory material to emphasize that he in no way conflates the story of this group’s treatment with that of the treatment of the Jews, Gypies, homeosexuals and other targeted groups during the Holocaust.  Nevertheless, the need to tread excruciatingly lightly is brought into relief in those reviews. 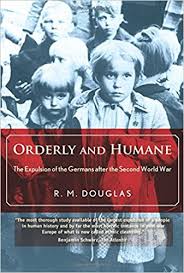 Finally, a comment from Stephan Bier at the end of his letter drove home the point of history being the provenance of the victors (recall that this is a rough Google translation and likely misses some of his nuance):

I was Ketzelsdorf only interested because I was born there. The political conditions were not pro-German. Even the current administration in Prague is not interested in historical truth. I have a garden Czech neighbor and told me that many of his relatives in Prague and its surroundings believe that the Germans came in the former Czechoslovakia only with Hitler 1938. You do not know that the German settlers hundreds of years ago, large parts of the country have made it all under cultivation, the land was donated. That is not taught at school. The expulsion of more than 3 million Germans and the appalling atrocities be concealed today. Bohemia and Moravia were hundreds of years to the German association of states. The language has Slavic origin and people have little cultural differences, but otherwise it is a European country like other countries.

So there you have it.  Learning history as it’s being written is an interesting, contentious subject.